Woof! Woof! How do I stop that dog from barking?!

The noisy dog is the bane of neighbors everywhere. Forget the crazy kid parties, and the motorcycles without a muffler; it is the barking dog that causes the majority of neighborhood arguments, and noise complaints.

So why do dogs bark, and how can we stop that barking behavior?

Why do dogs bark, and how can we stop our dog from barking? 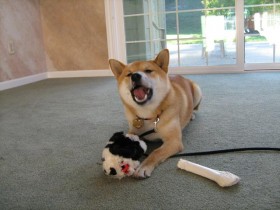 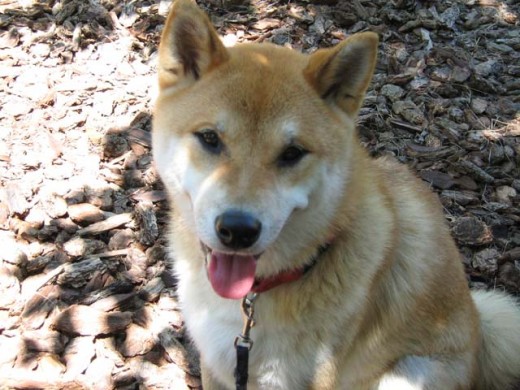 Only reward our dog with attention when he is showing a good behavior and NOT when he is barking.


When dealing with a noisy dog, remember that barking is often a symptom of some other problem.

Contrary to common belief, dogs do not bark just to annoy us and our neighbors, nor do they do it because of spite or vengeance.

The best way to stop dog barking, is to identifying the root of the behavior. Once we deal with the source of the problem, the “woof, woof” symptom will disappear.

First, we need to be around to observe our dog. We want to identify –

Once we understand these three things, we can develop a plan to retrain our dog. During the retraining process, do not leave him alone where he can practice, and be rewarded for his barking behavior.

Here are some training techniques to stop dog barking:

a) Teach our dog the “Quiet” command.

When our dog starts barking, bring out a really high priority treat, say Quiet, and give the appropriate hand gesture in front of his face.

The smell of the treat will engage his nose, and the hand gesture will briefly startle and distract him. This will probably cause him to stop barking briefly. As soon as he stops, mark the behavior (Yes) and treat him.

Keep practicing this until he understands the command. Then, we can slowly increase the duration of the Quiet command, before treating.

We can hasten the training process by initiating the bark trigger ourselves, for example by ringing the doorbell, squeaking a toy, or playing a recording of sirens. 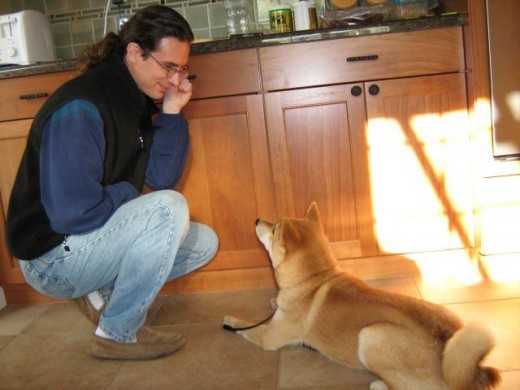 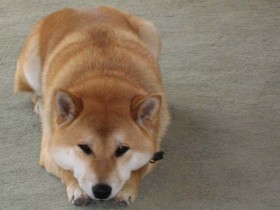 Ask for an alternative command, e.g. Down.

b) Ask for an alternative command.

In addition to Quiet, we can also ask for other commands that are inconsistent with barking.

For example, we may ask for a Down command, because dogs do not normally bark when they are lying down.

In fact, it is even better to use the Go to Mat command, which gets our dog to move to his bed and lie down. In this way, he moves away from the trigger object, to a location where he feels comfortable and safe. 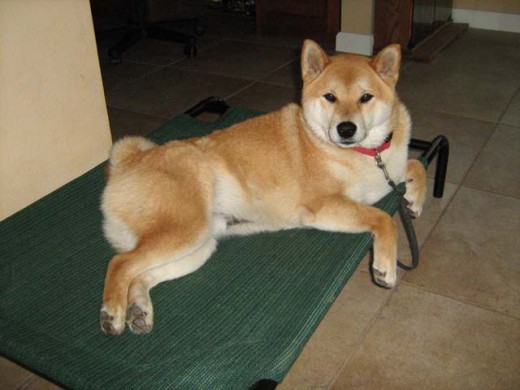 Ask for an alternative command, e.g. Go to Mat. 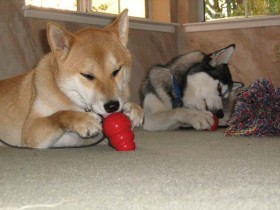 We can also distract our noisy dog by engaging him in an alternative activity. For example, we can play a game of tug, or give him a food toy, so that he is not focused on the bark trigger.

It is best to consistently establish a routine for our dog, so that every time he starts to bark, we get him to go to his bed, and play with his food toys. If we repeat this often enough, he will automatically perform this behavior instead of barking.

Note – For retraining to work, it is crucial not to let our dog practice his barking behavior when we are not around. If he practices unsupervised barking, and is inadvertently rewarded for it (e.g. by the postman leaving), he will keep repeating that behavior. With more practice, it will become a habit, and be more difficult to stop.

When we are not around to supervise, crate our dog in a quiet section of the house, and put the radio or television on, to mask the noise from outside. Only do this for short periods of time (< 3 hours). If we will be away for a longer duration, then consider dog daycare or dog walking. 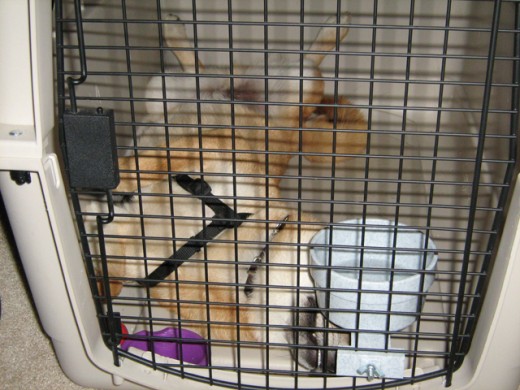 When we are not around to supervise, crate our dog in a quiet section of the house. 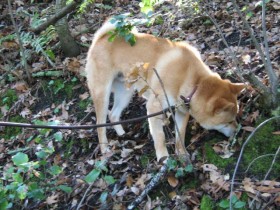 Retraining our dog to stop barking, may require a fair amount of supervision and time. While we are at work, we can consider putting him in dog daycare. Alternatively, we can hire a dog walker to take him on group walks, at the park. Both these activities will keep him engaged, well-exercised, and prevent him from practicing his barking behavior. 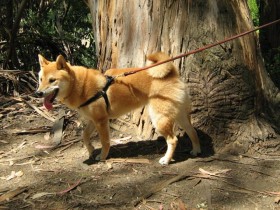 Daycare or a dog walker does not train our dog to stop barking.

Note that daycare or dog walking does not train our dog to stop barking.

It just removes him from the bark triggers, and gives him other activities to keep him engaged. If we stop these activities, he will likely start barking again. However, daycare or dog walking are great ways to prevent him from practicing his barking behavior, during the retraining process.

While it does not retrain our dog, it at least keeps the problem from getting worse. 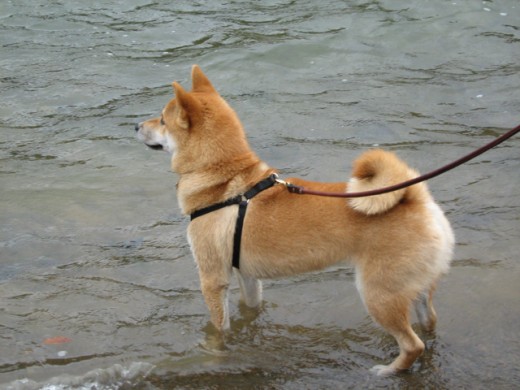 Daycare or a dog walker will keep our dog engaged, well-exercised, and prevent him from practicing his barking behavior. 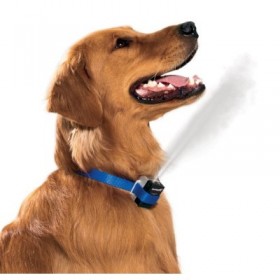 Anti-bark collars are a popular way to address dog barking issues. These collars are convenient, because they automatically deliver an unpleasant sensation to the dog, when he barks. In addition, the strength of the unpleasant stimulus is increased, if he escalates the frequency and volume of his vocalizations.

There are two types of anti-bark collars, a spray collar and a shock collar.

The spray collar automatically sprays the dog’s face with citronella when he barks. If he escalates his barking, a stronger spray is delivered.

The shock collar automatically delivers an electric shock to the dog’s neck, when he barks. The more he barks, the stronger the shock. Sometimes, marketeers refer to these collars as stimulation collars, gentle training collars, and other more people friendly terms, in order to make a quick sale. Do not be fooled by these sales gimmicks.

All anti-bark collars work by punishing the dog for barking.

They do not address the root of the problem, but instead try to suppress the barking behavior through the delivery of an aversive stimulus, for example, pain. As with many other aversive training methods, these collars run the risk of causing aggression in dogs, and other behavioral issues.

For example, our dog may bark every time the postman arrives. This would cause an electric shock to be automatically delivered to his neck. Rather than associate the pain to his barking behavior, he may associate it to the postman instead. This may ultimately cause him to become aggressive toward our innocent mail carrier.

If we *do* decide to use an anti-bark collar, it is perhaps best to only use the spray collars, or citronella collars. Studies (Steiss, Soraya) show that shock collars do not work any better than the spray collars, and they have a much greater likelihood of encouraging aggression in dogs.

When it comes to calming “nuisance-barking” dogs, a spritz of fragrance under the chin is more effective than electric shock, a test by the Animal Behavior Clinic at Cornell’s College of Veterinary Medicine has found.
~~[Cornell Chronicle]

There are also ultrasonic bark deterrent devices. However, since this affects all dogs in a given area (including dogs who are not barking), it has gotten poor reviews. Punishing dogs that are not showing any undesirable behaviors can lead to stress, anxiety, and even more behavioral issues down the road.

Shock collars are commonly used by dog veterans, during highly supervised training sessions, and solely for off-leash distance work. Leaving a shock anti-bark collar on an unsupervised dog, for protracted periods of time, is dangerous, and may cause physical and/or mental harm. 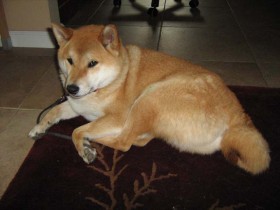 Watch out for signs of increased aggression, stress, fear, or other behavioral issues. Set up a web-cam to record him, so that we may observe how he responds to the collar when he barks. Some dogs become extremely stressed or frustrated, and may even escalate their barking behavior.

Remember that anti-bark collars work, by suppressing the barking behavior, and does not address the root of the barking problem.

Even though it may stop dog barking in the short-term, the problem may reoccur once our dog gets habituated to the spray or electric shock. It also increases the dog’s stress level, and lowers his quality of life. 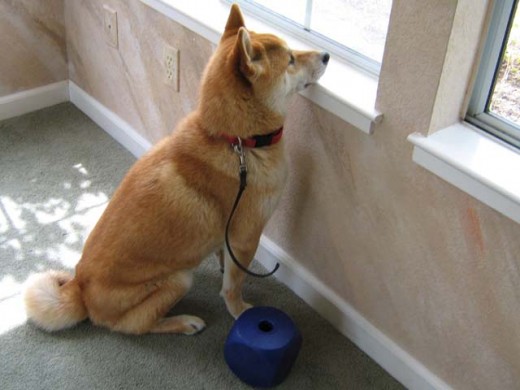 Remember that anti-bark collars work by suppressing the barking behavior and does not address the root of the barking problem.

Surgical debarking, debarking, or bark softening, is a surgical procedure where tissue is removed from a dog’s vocal chords, to reduce the loudness of his barks.

Most debarking procedures do not completely remove a dog’s vocalizations. Dogs that are debarked, usually have a huskier, softer bark that can only be heard at close range.

Surgical debarking is a controversial subject, and many consider it to be inhumane.

As with anti-bark collars, surgical debarking does not address the root of the barking issue. Instead, it may add stress to the dog because he is now silenced. The dog may feel more vulnerable, and may be more likely to use his bite, since his bark is no longer available.

Because of these reasons, surgical debarking should only be considered as a last resort option; when the only other alternative is euthanasia. Take the temperament of our dog into account, and consider how this process may affect his long-term quality of life.

Debarking is illegal in England. In the United States, debarking laws are determined on a state by state basis. Currently, it is only illegal in Ohio. 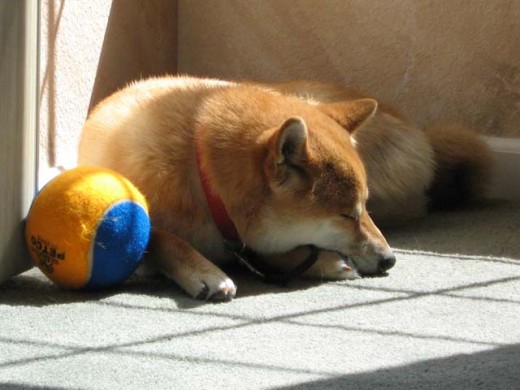 A tired dog is a good dog.