Brad Pattison is a well-known dog trainer in Canada. He has his own dog training television show, called At The End of My Leash which airs in Canada and Europe.

Brad Pattison’s show just started airing in the United States, under the name In The Doghouse, on Saturdays, at the Animal Planet.

Brad Pattison also runs a CET (Certified Educator Trainers) dog training program. Presumably, after attending one of these programs, you will get to put the CET stamp after your name. However, before enrolling in one of these classes, and fulfilling your lifelong dreams of becoming a CET, please watch this short video of Brad Pattison in action in one of his classes.

[Sadly, this last video has also gotten yanked from rutube.]

It is often difficult to find videos of Brad Pattison in true action because these videos keep getting yanked from their online sites. However, the fact that Pattison and gang feels the need to yank short ‘training’ class videos, says a lot about Pattison’s “training techniques”.

So where does Brad Pattison fit in? 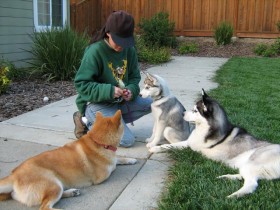 The energy you use to interact with a dog is extremely important, and can greatly affect the dog’s behavior.

Even the people who support aversive methods generally agree, that what was shown in the Brad Pattison video clip is not good ‘dog training‘. Anyone who trains dogs, owns dogs, or even just watches Cesar Millan occasionally, knows that the energy you use to interact with a dog is extremely important, and can greatly affect the dog’s behavior.

Performing leash jerks using angry or frustrated energy only teaches the dog one thing, and that is to blindly fear you. There will be little respect or trust involved. When angry, annoyed, or frustrated, your erratic behavior will only confuse the dog, and set back his learning process. It will also increase his stress levels, lower his quality of life, and weaken your human-canine bond.

In fact, such energy is also counter-productive for teaching humans. 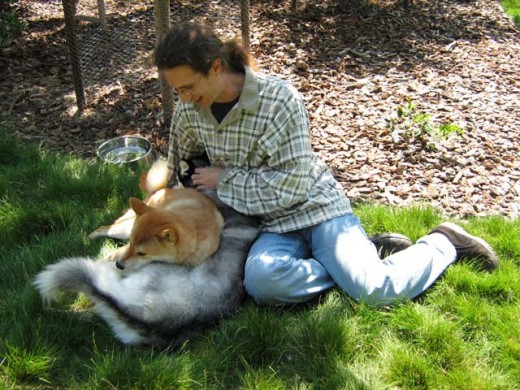 Build a strong bond with your dog that is based on trust and calm authority.

I saw him first hand this past Sat., he was in Woodbridge and all I can say is this – “I don’t understand why anyone would follow his methods”. Someone once told me, “don’t judge a book by its cover”. So I had to see things for myself, and what a wake up call it was.

What he does to train dogs is not nice at all. In fact, he makes the dogs fear him. One even got away from him as it was tied to his leg. Now, that’s got to give you some insight or idea of what your dog is trying to say to you. Another dog got away from one of his CET trainers. Go figure, they don’t want to be abused or yanked all over the place.

Sorry, but this is not training at all. I have trained dogs for 5 years now and not one has tried to get away from me. They stay close to me and watch everything I do.  I use positive methods without food just praise.  …

~~[ Shadow – full comment can be found in the comments section below ]

I also caught the first episode of Brad Pattison’s In The Doghouse program and I must say that it was less than impressive.

On the positive side, there was no crazy, angry, frustrated leash jerking. Brad Pattison also briefly talked about the force of the leash correction and being careful not to over-correct the dog, which are both good points.

However, these brief interludes of semi-saneness were insufficient to combat the general negativity and lack of focus that characterized the rest of the show.

If there was to be a silver lining to this dark cloud, it is perhaps that more people will realize that aversive methods are not generally effective for teaching humans OR dogs.

As for Brad Pattison and his CET trainers, I will keep my dogs far, far away from them all. I will also keep myself safe and stay away from this particular cloud of nastiness.